Faster, Cleaner and Greener: An Introduction to Micellar Catalysis for Medicine Development 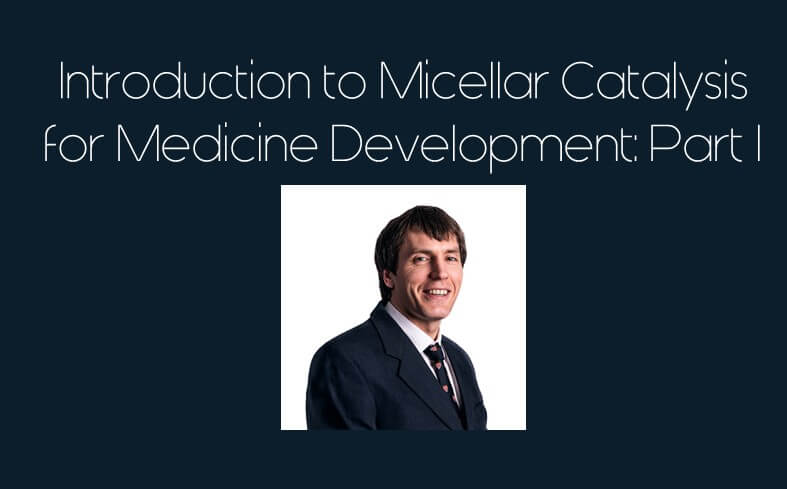 Faster, Cleaner and Greener: An Introduction to Micellar Catalysis for Medicine Development

Surfactants aid in solubilizing organic compounds due to the fact that, above a certain concentration, they form micelles in water. The shape and size of the micelles depend on the surfactant used.

These micelles provide a means for synthesizing both novel and conventional materials in aqueous media, resulting in improved reaction rates (with a 10–100-fold increase) and, because they eliminate the need for organic solvents, a more sustainable workflow1, 2. As the amount of surfactant required to form micelles is small compared to the water present, the use of these media in synthesis has been referred to as micellar catalysis.

As shown in the graphic below, the ever-expanding micellar toolbox can be used to efficiently mediate great swathes of chemistries commonly used to assemble active ingredients3.

But what are the advantages and why is micellar catalysis drawing increasing interest?

The use of organic solvents has propagated many unsustainable practices, but environmental concerns are rapidly changing the evolution of chemical research. As a result, many of the latest advances in chemical synthesis and catalysis are now strongly tied to the concept of green chemistry.

Proper solvent selection, for example, has driven the creation and integration of alternative solvents, but water is one ideal green chemistry solvent that is often overlooked. As well as its low cost and ability to dissolve more substances than any other solvent, water is sustainable and has the smallest impact on the environment relative to all other liquids, and can sometimes succeed where organic solvents have failed. The use of water to perform aqueous micellar catalysis therefore offers a safer and more environmentally sustainable alternative2, 4.

There are economic and productivity benefits too. By using micellar catalysis to replace the use of more traditional methods and organic solvents, chemists can achieve faster reaction rates and better yields with lower costs, as well as reduced production and energy demands, for many reactions2.

The advantages are clear, and there is a growing bank of evidence to reinforce these claims. For example, during one evaluation of the potential of surfactant technology5, it was shown to be a straightforward and highly advantageous technology. Application on-scale resulted in significant benefits across the entire synthetic route, not just from an environmental standpoint but also from an economic and productivity perspective. This included reduction of organic solvent use, reduction of water use, reduction of metric such as PMI, reduction of cost, reduction of cycle time, milder reaction conditions, improved yields and improved process performances.

Quantitatively, the differences for some of these benefits approached 50% in favour of surfactant technology, all of which realised in multi-purpose facilities already within the infrastructure of standard pharmaceutical or chemical organizations. All benefits were achieved using a catalytic amount of a non-ionic designer surfactant (e.g. TPGS-750-M) in water instead of traditional organic solvents5.

So, micellar catalysis is a key technology that is offering an opportunity to wean the assembly of APIs off of organic solvents and helping to move chemistry to a better and more sustainable future.

Despite these excellent properties, water is among the least used solvents and aqueous micellar catalysis remains an emerging practice. We encourage all our readers to give it a go and see the benefits for themselves.

Want to find out more?

For more information on the use of micellar catalysis and advice on how it can help transition your workflow to a more sustainable practice, including case studies where its use has improved more traditional reactions, watch our webcast: Faster, Cleaner and Greener: Why chemistry in micellar and micellar-like media is now a viable option for chemical development